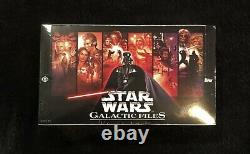 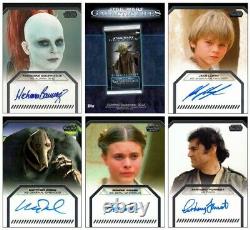 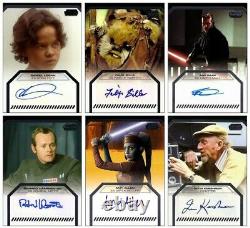 This listing is for a factory-sealed and case-fresh, 2012 Topps Star Wars: Galactic Files Series 1 Hobby Box, which contains 24 packs with 12 cards per pack. There are 2 Hits Per Box, including 1 Sketch Card AND 1 Autograph or Embroidered Patch Card.

See listing photos for an overview of the Autograph Cards included in this set, which includes Harrison Ford's second Star Wars autograph. Note: Individual cards depicted in the listing photos are merely examples of the possible autograph pulls from this set, and are not included in this sale. Harrison Ford as Han Solo. Carrie Fisher as Princess Leia. Mark Hamill as Luke Skywalker.

Bonnie Piese as Beru White Sun. Richard LeParmentier as Admiral Motti. Michonne Bourrigue as Aurra Sing. This item is in the category "Collectibles\Non-Sport Trading Cards\Sealed Trading Card Boxes". The seller is "disneyphanatic" and is located in this country: US.