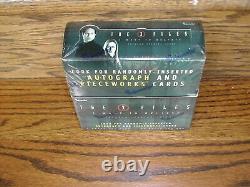 Pieceworks cards (1:24 packs). Any boxes for sale were picked at random from a case.

A-1 David Duchovny as Fox Mulder. A-2 Gillian Anderson as Dana Scully. A-3 Chris Carter - Director/Writer.

A-4 Frank Spotnitz - Producer/Writer. A-5 Xzibit as Special Agent Drummy. A-6 Adam Godley as Father Ybarra. A-7 Chris Owens as The Great Mutato.