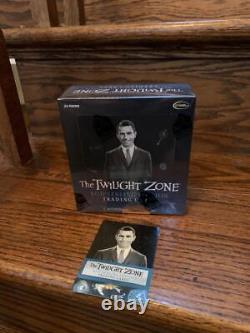 A-153 Martin Landau as Dan Hotaling Mr. A-154 Ann Jillian as Ilse Mute. A-155 Ron Hagerthy as Ben Dead Man's Shoes. A-156 John Considine as McClure The Thirty-Fathom Grave. A-157 Barbara Barrie as Myra Russell Miniature.

A-160 Darryl Richard as Thompson (inscription)The Changing of the Guard. A-161 Carol Byron as Carol Chase Ninety Years Without Slumbering. A-162 William Swan as Technician The Long Morrow.

A-168 Morgan Brittany as Little Girl Valley of the Shadow (4 variants). Titus as Young Horace Ford Incredible World of Horace Ford. A-170 Michael Gorfain as Timmy Danvers You Drive. A-171 Bill Mumy as Billy Bayles Long Distance Call. Photos are inside TV-set shaped window. AI-1 William Shatner as Bob Wilson Nightmare at 20,000 Feet. AI-3 Bill Mumy as Anthony Fremont It's a Good Life. I HATE ANYBODY THAT DOESNT LIKE ME!

YOU'RE A BAD MAN! AI-5 Michael Forest/Steve Black Leather Jackets. We've got work to do. AI-6 Ron Howard as The Wilcox Boy Walking Distance. AI-7 Earl Holliman as Mike Ferris Where Is Everybody?

"I feel someone's watching me - Following me". It's all a Bad Dream - But It's time to wake up now - It's Time to WAKE UP!! - But Nothing is destroyed. "Thank you, Rod for giving me this great role". AI-8 Shelley Fabares as Ellen Tillman Black Leather Jackets.

AI-9 Cloris Leachman as Mrs. Fremont It's a Good Life. It's a good life. AI-10 Morgan Brittany as Susan Caesar and Me.

The seller is "coastsidetoys" and is located in this country: US. This item can be shipped worldwide.